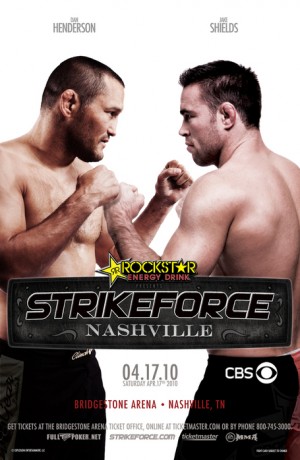 The first MMA fight card in Nashville history that will be televised on network television (CBS) will include nine athletes from Nashville, one from Knoxville (St. Preux) and one from Memphis. They will be featured on the non-televised portion of the fight card.

St. Preux (4-4), who will take on Chris Hawk (3-3) of Memphis, is a 6-foot-3, 26-year-old who played for the Vols from 2001-2004. After graduating with a degree in Sociology in ’04, he became heavily involved in MMA, utilizing his impressive wrestling skills and natural athletic abilities. He competed in Tennessee’s first sanctioned MMA event on Feb. 20, 2009.

In a 2009 Sports Illustrated poll, St. Preux, who fights out of Knoxville MMA, finished second for best submission of the year after making Ombey Mobley surrender from a slick pressure submission known as a “calf-slicer” on April 25 in Knoxville.

Another Nashville fighter, Josh “The Warhammer’’ Shockman (6-2), will take on Cale “Aquaman’’ Yarbrough (6-1) of Atlanta.

Pennington is an explosive and charismatic bantamweight. The 5-foot-4-inch, 24-year old specializes in wrestling and trains San Shou boxing at Integrated Martial Arts in Lebanon, Tenn., under Brian Fussell.

The International Sport Karate Association (ISKA) Tennessee Flyweight Champion, Pennington went 7-2 in the amateurs. He won the ISKA belt by knocking out previously unbeaten David James in the first round in Murfreesboro. Pennington is popular with the fans for speaking his mind and never backing down from a fight.

Ortiz triumphed in his pro debut last Feb. 20, in Nashville, winning by impressive first-round submission over Lucas Thomas via an arm triangle just a minute into the match.

Worsham is in the Army and stationed in Ft. Campbell, Ky.  A fine wrestler with strong standup, the 5-foot-10, 26-year-old Worsham is a two-time champion in the Gladiator Challenge.

The son of MMA pioneer Cal Worsham, Hunter turned pro in April 2007 and fought four times that year. Due in large part to his stint in the service, this will be just his third start in two and a half years and second since donning the army green.

Underwood, a native of Music City who now resides in Union City, is a heavy-handed stand up fighter with a relentless style. He turned pro on April 24, 2009, and won all three of his starts that year. He registered a unanimous decision victory over Terry Robinson last Feb. 27.

Along with an older brother, Jake, the 6-foot-2, 26-year-old Underwood co-owns Thunderdome Training Center, where he is a personal trainer. His MMA squad is called Team Relentless.

West was born and raised in Ashland City, which is 20 miles northwest of Nashville. At Cheatham County High, he earned All-State honors in football. West enlisted in the United States Marine Corp after high school. He served for six years and spent 12 months in Iraq.

Upon returning home, West worked for the Cheatham County Sheriff’s Department. He played semi-professional football for several seasons, in Nashville, for a team of law enforcement personnel.  A specialist in Brazilian Jiu-Jitsu, West went undefeated as an amateur before turning pro July 18, 2008. He’s coming off a 50-second TKO over Marcus Fletcher in February.

Uhrich, a member of Team Vortex, is a popular 6-foot, 24-year-old known for his elbow strikes and aggressive style. He compiled an amateur record of 6-0 before going pro in October 2007.

Uhrich won a unanimous decision victory over Brandon Barger in his last start in October ‘09.

Floyd, a 5-foot-10-inch, 21-year-old who fights for AGEMA Fight Team out of Tupelo BJJ, prefers to keep it on the ground. He went 5-0 in the amateurs.

Campbell earned “Amateur of the Year” honors in 2009 by an MMA website. An experienced fighter, he is coming off a 37-second knockout over Dan Virtue this past March 6.

Yarbrough has won six in a row since losing his debut on July 19, 2007. This will be the 6-foot-2, 23-year-old’s first start in 2010. A top athlete in high school where he participated in baseball, basketball, football, and swimming, Yarbrough attends the University of Georgia where he studies psychology. He got the nickname “Aquaman” for his prowess in the pool.

Shockman , who fought in the UFC, is a talented sort who possesses good boxing and Muay Thai skills and makes for scintillating scraps.

In March 2009, STRIKEFORCE signed a multi-year agreement to stage live MMA events on the premium cable television network.  The promotion made its live, primetime debut on CBS with the “Fedor vs. Rogers” mega-fight that it co-promoted with M-1 Global on Saturday, Nov. 7, 2009, and generated 5.46 million viewers for the main event between the world’s No. 1 heavyweight, Fedor Emelianenko, and superstar Brett “The Grim” Rogers.