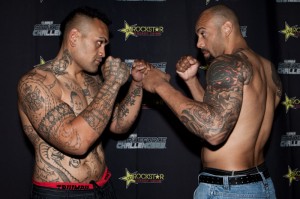 FRESNO, CALIF. (Mar. 25, 2010) — The fighters who will compete in the STRIKEFORCE Challengers mixed martial arts (MMA) event on Friday, Mar. 26  airing live on SHOWTIME at 11:45 p.m. ET/PT (delayed on the west coast) weighed in on Thursday at the World Sports Café in Fresno, Calif.

This evening of fights will be available to a record 54.4 million households as part of the SHOWTIME ALL ACCESS Free Preview Weekend on SHOWTIME, SHOWTIME HD™ and SHOWTIME On Demand.  From Thursday, March 25 through Sunday, March 28, viewers across the country have the opportunity to sample the premium network’s award-winning programming via linear service, On Demand and in HD, including two live events from SHOWTIME Sports.

In the main event heavyweight sensation Lavar Johnson (13-3) will square off with undefeated Lolohea Mahe (6-0-1) of Hawaii.  Johnson’s effort will mark a miraculous comeback after he was gunned down and nearly killed by Central Valley area gang members on July 4, 2009 while attending a family barbeque near his home in Madera.

Fresno’s Zoila Frausto, an undefeated women’s prospect, will take on another standout fighter in Miesha “Takedown” Tate (8-2) of Olympia, Wash.  Frausto, a former soccer player for Fresno City College, has compiled a perfect 5-0 record in professional MMA since her debut on February 13, 2009.

Tickets for the STRIKEFORCE Challengers event are on sale at the Save Mart Center box office and select Save Mart Supermarkets as well as at all Ticketmaster locations (800-745-3000), Ticketmaster online (www.ticketmaster.com) and STRIKEFORCE’s official website (www.strikeforce.com).

Save Mart Center doors will open for the STRIKEFORCE Challengers event at 6 p.m. PT. The first live, non-televised, preliminary bout will begin at 6:45 p.m. The SHOWTIME telecast begins at 11:45 p.m. ET/PT, delayed on the west coast).

“Training camp was great, it was real good.  I’m back 100 percent, nothing has changed.

“I got a lot of people supporting me because I’m fighting at home.  I don’t want to let anyone down.  This is a huge fight for me.

“It was a very rough camp, but it was good.  It was definitely one of the hardest camps I’ve ever had.

“We have been working on our stand up and on a little wrestling.  We’re ready for whatever happens in there.

“I hope to win, and I hope to fight well. I’m expecting standup, ground game, you name it, I’ll do whatever it takes to win.”

“Training camp went really well.  We’re working really hard on our standups and some new techniques.  I’ve been working on a lot of my ground game to make sure I’m more well-rounded.

“I’ve had an 11-month layoff, so I’ve had a lot of time to hone in on my weaknesses.  Plus, I’m at a lower weight where I feel more comfortable.

“I think I’ve evolved a little bit more and I’m more relaxed while I’m in the heat of things.  I think that has helped me evolve as a fighter.

I know he’s (George Bush III) is a wrestler, so he’ll be good at that.  He’s the perfect fight for me to showcase my standup ability.  I’m really excited for it.”

“I’m happy to be here.  I’ve worked my whole career to get to this level.  I’m here to see and to prove that this is the level I belong at.  My journey is only half complete.

“It’s been the best camp I’ve ever had.  I couldn’t be happier with it.

“I expect her to stand up for about 30 seconds, but as soon as I hit her she is going to try to take me down.  She won’t be able to stand up with me or take my punches.

“It’s always really good to be fighting at home.  There will be a lot of supporters, so I can’t wait to get in there and brawl. “

“I plan on going out there and taking care of business.  I’m going to capitalize on any mistake she makes.

“I’d like to end it in TKO, but if the submission is there I’ll take it.

“I’m looking for the quick victory.  The fans are going to love this fight.  She’s in her hometown, so they’ll all be behind her.  I know she’ll bring it and I’m prepared.”