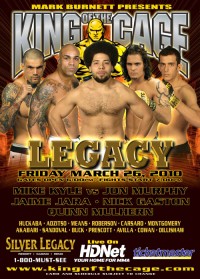 The broadcast will open with a bang as Quinn Mulhern (9-1) meets Koffi Adzitso (10-4) for the vacant Welterweight title. Mulhern put himself into title contention with a TKO of UFC veteran Rich Clementi on HDNet last February. With 16 of their 19 combined wins coming decisively by KO, TKO, or submission, this fight promises to be epic.

In the second title fight of the evening, Tony “Kryptonite” Lopez (18-2) returns to HDNet to defend his Heavyweight title against Tony Johnson. Lopez is looking to continue his 16-fight winning streak, the second longest active winning streak in the sport. Tony Johnson is an undefeated heavyweight prospect from American Top Team. He is a former collegiate wrestler and football player with an amazing combination of power and speed that is rare among heavyweight fighters.

In the main event of the evening, Heavyweights collide as veteran Mike Kyle (15-7-1), winner of five of his last six fights, meets “Bully Beatdown” star Jon Murphy (5-3). Kyle is looking to establish himself as the number one contender in the Heavyweight division.

The broadcast also marks the MMA broadcast debut of former WWE Diva, Playboy Cover girl, and current “Celebrity Apprentice” contestant Maria Kanellis. She will join “The Voice” Michael Schiavello and Jason “Mayhem” Miller to form what promises to be one of the most dynamic and entertaining broadcast teams in all of sports.

“This broadcast promises to deliver both in and out of the cage,” said Andrew Simon, CEO of HDNet Fights. “These fights will not disappoint as HDNet continues to introduce fight fans to the stars of ‘King of the Cage’ through the storytelling of Mark Burnett. Plus, the addition of Maria Kanellis to our already outstanding broadcast team will make them the best in the sport.”

Rounding out the main card is a Heavyweight fight between Nick Gaston (5-2) and Mike Guidry (4-4) and a middleweight bout between Tim Means (8-2) and veteran Jaime Jara (25-7). A swing fight in the Lightweight division featuring Dustin Akbari (4-1) versus Jack Montgomery (7-7) will air if time permits.