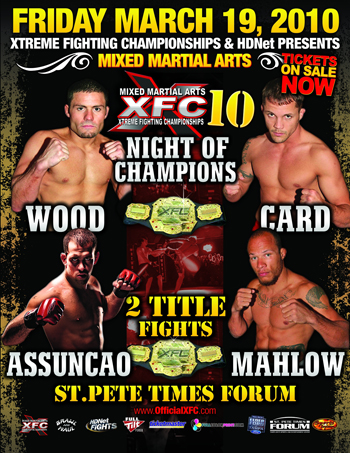 This explosive event will feature two title fights. In the main event, fighting for the XFC Featherweight title is Jason Wood (12-2, 4-0 pro) versus current titleholder, Jarrod Card (10-3-1). Both fighters will put their respective four-fight winning streaks on the line tonight.

“HDNet Fight: XFC X – Night of Champions” kicks off a loaded week of MMA on HDNet,” said Andrew Simon, CEO of HDNet Fights. “The network will broadcast three LIVE events in seven days – only HDNet will take you to Florida for this event, to Japan for ‘DREAM 13’ and to Reno for ‘Mark Burnett Presents: King of the Cage.’ Also, you get two episodes of ‘Inside MMA,’ and the debut of ‘Fighting Words’ with Mike Straka featuring special guest Dana White. If you don’t have HDNet, now is the time to demand it from your cable or satellite provider!”

Battling for the XFC Lightweight champion are John Mahlow (12-11) and Junior Assuncao (9-4). Mahlow was the first XFC belt holder, while UFC veteran Assuncao will enter the ring with a three-fight win streak.

Gilbert Burgos (5-0) will face Frankhan Sharipov (8-3) for the right to fight for the XFC Bantamweight title. The winner of the bout will face Pablo Alfonso at an upcoming XFC event for the Bantamweight championship. Burgos’ undefeated streak is on the line, as he faces a confident fighter in Sharipov, who has won 5 of his last 6 fights. Rounding out the card is Julio Gallegos (3-0) versus The Ultimate Fighter runner-up Shane Primm (4-1), Florida natives Bruce Connors (7-1) versus Derek Schiffer (2-1), and, the always entertaining winner of the first XFC Open Tryout, Chris Barnett (2-0) is in action.

The announcer team for the evening is “The Voice” Michael Schiavello and MMA legend Guy Mezger.