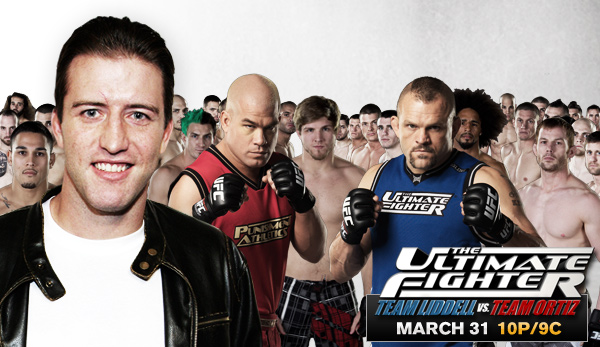 Visit Tufaftermath.Spike.com To View A New Season Of The Digital Series
On Wednesday, March 31 At 11:00 PM

Each “The Ultimate Fighter: Aftermath” will include interviews from current cast members who will provide fresh insight and a behind-the-scenes look from the week’s previous episode.  Taped in Los Angeles, each installment will also include analysis of the week’s previous fight and special guests.  Last season, “The Ultimate Fighter: Aftermath” averaged two million views on Spike.com.

Bonnar’s (14-7) three-round war against Forrest Griffin in “The Ultimate Fighter 1” finale in April 2005 ranks as one of the most memorable fights in mixed martial arts history.  Despite losing, Bonnar received a three-fight contract and has since fought some of the biggest names in the light heavyweight division including Rashad Evans, Keith Jardine and Mark Coleman.

The 11th season of Spike TV’s most popular original series ever, “The Ultimate Fighter,” for the first time, will feature 28 of the best up and coming mixed martial artists in the world competing for 14 spots in “The Ultimate Fighter” house.    The series boasts a new format which will be introduced to viewers in the show’s premiere episode.  The smash hit will also feature two coaches who need no introduction to mixed martial arts fans, UFC legends Chuck “The Iceman” Liddell and Tito “The Huntington Beach Badboy.”