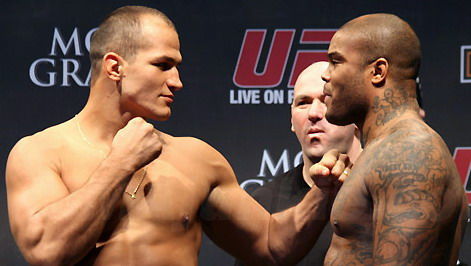 This weekend Junior dos Santos takes on Gabriel Gonzaga in perhaps the biggest fight of his still young career. Ever since bursting onto the scene with a highlight reel knockout of Fabricio Werdum, Dos Santos has been considered one of the hottest heavyweight prospects in recent memory. While his striking has been nothing short of amazing, question still persist about his ground game. Let’s take a look at Dos Santos’ only career defeat.

Commentary
It is clear from the start that Ferreira wanted to get the fight to the ground immediately. Dos Santos tried to defend by turning and running away. However, Ferreira rushed in again and finally got the takedown. After Dos Santos reversed the position, Ferreira frames up an armbar and elicits the tapout.

The armbar was not especially tight, and Ferreira finished the hold incorrectly. Once the move was applied Dos Santos appeared completely lost. Many pundits believe that he has improved on the ground simply because he has spent so much time with the Nogueira brothers. The ground game is not something everyone picks up easily. However, Gonzaga is the type of fighter that can test Dos Santos on the ground, so this weekend we will find out if he has truly improved.