Team Jackson’s Women’s MMA is a group of six ladies who all share the goals of being the best in the sport and supporting the advancement of all women fighting in the sport of MMA.

Julie Kedzie originally had the vision of a strong women’s MMA team come out of the Jackson/Winkeljohn‘s gym in Albuquerque, N.M.  The team, now formed and supported by their sponsors, BOOM Superfoods and Modern Gladiator Fight Gear, plan to compete in grappling tournaments together throughout the country, support each other in both amateur and pro MMA fights, fund-raise together for hard-working charities, travel together to women’s MMA events, and organize their own events.

The first event the Team is attending together is the GFight Women’s MMA Summit starting March 20th in Evansville, Ind. The event is being kicked off by an amateur show that will feature team member Emily Peters-Kagan.

Julie will be cornering Emily in her long awaited MMA debut. BOOM Superfoods, who has covered the team’s travel expenses for the event, will be taking video footage of the fight, doing one-on-one interviews, as well as taking photos of the team in their custom designed wear by fight wear sponsor Modern Gladiator.

One of the seminars at the summit will be led by Greg Jackson and Julie Kedzie. The team will also be working with the two masters in private training sessions. The team plans on using their time at the summit to create a team schedule for this year that will include most of the women on the team fighting.

Stay tuned for what will be coming next out of Team Jackson’s Women’s MMA.

JULIE KEDZIE is a mixed martial artist and the Team Captain of Team Jackson’s Women’s MMA. With 21 professional MMA fights she is a well-rounded veteran of the sport. She is a third degree black belt in Tae Kwon Do and specializes in Brazilian Jiu Jitsu.

Kedzie has a Bachelor of Arts in English Literature from Indiana University. Kedzie rose to prominence in MMA on Nov. 19, 2005, when she won the one-night HOOKnSHOOT Women’s Grand Prix in Evansville, Ind.

She repeated this feat in 2006. On Feb. 10, 2007, Kedzie faced undefeated rising star Gina Carano in a featured bout at “EliteXC: Destiny”, which aired live on Showtime. She was defeated by Carano, but the fight received Fight of the Night honours.

It was just the second time that Kobold had been defeated in 19 fights. Kedzie later signed a contract with the American Fight League, but the promotion folded and Kedzie was released from her contract.

Along with her fighting career, Kedzie is also Greg Jackson’s personal assistant.

MICHELLE WATERSON is an Thai American female mixed martial artist and model whose nickname is “The Karate Hottie”. Born in Colorado Springs and raised in Aurora, Waterson began her modeling career in 2004 after she graduated high school.

A karate student since the age of 10, Waterson holds a Black Belt in American Freestyle Karate and has also trained in Wu Shu and Muay Thai. Waterson rose to fame as a contestant on the Muay Thai-themed Fight Girls reality show on the Oxygen television network.

Waterson made her MMA debut on February 16, 2007, at Ring of “Fire 28: Evolution” against Andrea Miller and won the fight by unanimous decision. She faced current Freestyle Cage Fighting Champion Lynn Alvarez at “Ring of Fire 31: Undisputed” on Dec. 1, 2007, but lost by submission in the first round.

Waterson made her Strikeforce debut against Tyra Parker at “Strikeforce: Payback” on Oct. 3, 2008. She won the fight by rear-naked choke submission in the first round.

Waterson faced Karina Taylor at Duke City MMA Series 1 on March 1, 2009. She won the fight by armbar submission in the first round. There was some controversy with this fight due to the fact that Taylor did not tap out to the armbar.

Waterson most recently faced the debuting Rosary Califano at Extreme Beatdown 6 and won by submission due to a flying armbar in just 15 seconds.

TAMI LOVE CARSWELL was born and raised in the San Francisco Bay Area. She currently resides in Tallahassee, Fla. As a young athlete she competed in Track and Field placing in state long distance runs.

Tami started training in boxing at King’s Boxing Gym in Oakland, Calif. alongside tough professional boxers like Andre Ward. After falling in love with boxing she became a Certified USA Amateur Boxing Coach and Certified Boxing Fitness Trainer so she could share “The Sweet Science” with her students.

Tami has had the opportunity to train with 8-time world champion and now boxing trainer Ann Wolfe in Austin Texas.

While managing a mixed martial arts gym and boxing program in Tallahassee, Tami was inspired to train as an MMA fighter. She placed 2nd in 2009 at a NAGA event in Florida. Her interest in MMA has led her to become a coach for a women’s MMA and self defense program at Tallahassee Combat Sports.

She still enjoys running and preparing individuals to run in marathons as the Program Director of the Jeff Galloway Tallahassee program. As a part of Team Jackson’s Women’s MMA, she is doing what it takes to make a name for herself and all women in the sport.

The goal is to use her “dogged determination” to make a big impact in women’s MMA now and down the road. She is a sponsored fighter and spokeswoman for Boom Superfoods. In the partnership with Boom Superfoods she hopes to influence others to feed their inner warrior in mind, body, and spirit.

When Tami is not training. she is managing other fight careers, interviewing other professional mixed martial artists, and sharing her enthusiasm for pugilism by writing about MMA for ProMMAnow.com. Tami is the PR manager for Team Jackson’s Women’s MMA and can be reached at tamiboom@gmail.com. Please contact her about interest or questions regarding the team.

HEATHER JO CLARK, 29, of Los Angeles, Calif., was raised in Southern California. She has studied Shotokan Karate and trained with Benny Urquidez in kickboxing. She is a lifelong athlete and played Division I Hockey at St. Cloud University in Minnesota.

She works as a professional photographer and specializes in adventure, event, and portrait photography. Her photographs are used on Jackson/Winkeljohn’s web site (www.jacksons.tv).

She moved to New Mexico to train with Jackson’s to further her goal of being the best 125 pound female fighter in the world.

EMILY PETERS KAGAN, 28, of Bangor, Maine, has been an athlete most of her life. Throughout her younger years in Maine, she participated in various sports including skiing, soccer, tennis, baseball, and basketball.

A few years later, Emily was enrolled in college just outside of Baltimore, Md., where she pursued a degree in Management and International Business. It was there that Emily was able to finally start her martial arts career.

At 18, she began in traditional Jujitsu with the AJA, receiving her black belt in 2003. That year, she moved to Israel where she continued her training with the World Ju-Jitsu Federation, a local Muay Thai gym, and a few other Gi and no-Gi grappling dojos.

When she returned to the US in 2006, she joined Team Irish of Bangor, Maine, training under UFC veteran Marcus Davis. With Team Irish, Emily competed in a local southern Maine grappling competition and placed third in a men’s bracket, and later won the women’s absolute no-Gi division at the 2007 Freestyle Grappling Open in Portland, Maine.

When she’s not training, Emily is an avid trail runner and mountain biker, and enjoys reading, dancing, art, and spending time with friends and family.

Under the support and guidance of Marcus Davis and Garth Krane of Team Irish, she packed up her car and drove across the country to fit with Team Jackson where she knew she would get the best opportunity to further her career as a female MMA fighter.

She works full time in order to support her full-time training schedule, and her time off is spent mostly cross-training in her two other passions, trail running and mountain biking!

Her family, especially her mother, brother, and father are all HUGE supporters. She is fueled by the excitement of her family and friends across the U.S. and Israel to see her succeed.

LINDSAY JONES, 30, was born and raised in Albuquerque, N.M., home to Team Jackson/Winkeljohn. Linsday has always been athletic and shown commitment to her involvements.

At BYU, she played on their softball team while completing her B.A. in Sociology. With the busy and demanding full-time position as a Personal Assistant, her commitment to the team and to her training is nonetheless evident in her accomplishments.

As an amateur fighter with a kickboxing record of 1-0, Lindsay has studied Brazilian Jiu-Jitsu for four years, competed in Southwest GrappleFest, and Pan American Games for BJJ.

When asked why she loves to fight and what her goals are, she said, “My goal is to become a professional fighter and be the best.” 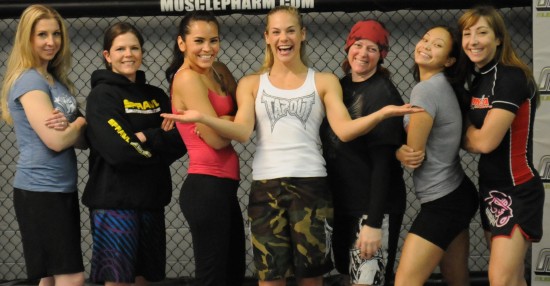