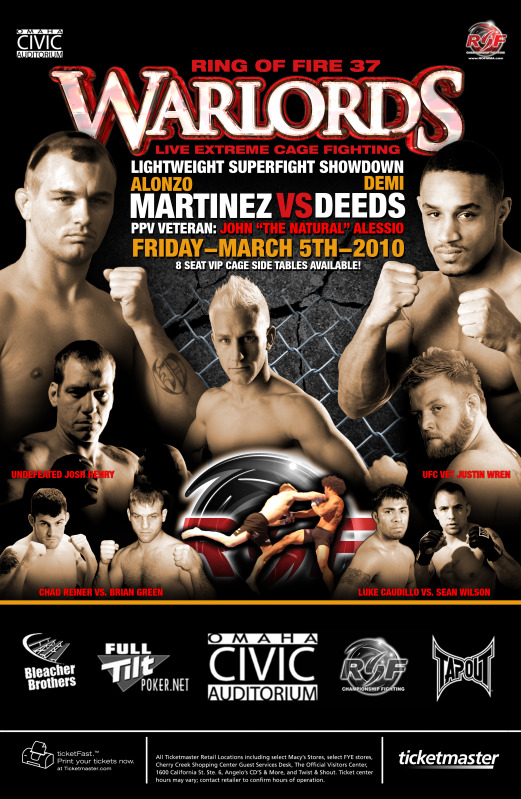 OMAHA, Neb. – “Ring of Fire 37: Warlords” takes place tonight, Friday, March 5, at the Omaha Civic Auditorium in Omaha, Neb. This event, which features 13 professional mixed martial arts fights with some well-known names, will be available tonight in a live online pay-per-view beginning at 7:30pm ET at GoFightLive.com. The price for the live online stream is only $9.99. If you don’t already have a GoFightLive account, be sure to get there a few minutes early to set it up.

The “Warlords” event features 13 premium bouts and will be headlined by Omaha’s most-touted lightweight, Alonzo “Zo Diddy” Martinez, as he faces off against the Des Moines destroyer Demi Deeds. Deeds and Martinez have history that dates back to 2003 when the two met at “Gladiators 20” in Des Moines, Iowa, in what was both fighters’ professional MMA debut.

Since then, Martinez has amassed an impressive 25-13-1 record and has faced such fighters as Toby Imada, Yves Edwards, and ClayGuida. He is currently on a three-fight win streak.

Deeds actually knocked out Martinez at 4:02 of round one in their first match-up seven years ago. Since then, he has gone on to put together a record of 15-6, and has faced such fighters as Shonie Carter and Kevin Burns. And just like Martinez, he also is currently riding a three-fight win streak.

The career parallels and the story behind this main event Martinez vs. Deeds match-up is quite interesting. Although Martinez has had more fights, their win/loss ratio is very similar. Their first fight was in Iowa, which is where Deeds is from, and he won. This fight is in Omaha, where Martinez is from. They both won their last three fights. They both have seven knockout victories.

Will Martinez, who appears to have a slight ground advantage, choose to stand and trade with Deeds, who probably has the advantage on the feet? Tune in tonight to find out.

UFC/WEC veteran John Alessio makes his Ring of Fire debut against John Delanoit. Alessio, who is coming off back-to-back wins will try to keep the momentum going as Delanoit tries to rebound after losing a first round TKO to Josh Neer in his last bout.

Arguably the most anticipated bout on this card will be the return to action of TUF 10 Heavyweight Justin “The Viking” Wren, as he makes his first post-UFC appearance by taking on undefeated Josh “Hardcore” Henry. ProMMAnow.com spoke to Wren earlier this week about what the fans can expect to see in his return to MMA action at Ring of Fire 37. Wren said,

Man I am itching for this fight bad. I wish I could have fought a week after my last fight on the Finale. There is nothing more that I want to do than to get back on the winning track, and set my sights back on a bigger and better future. The fans can expect to see me get the “W” and to put on a dominant performance. If I come out with anything less then it’s back to the drawing board, but in my mind, I am looking to dominate.