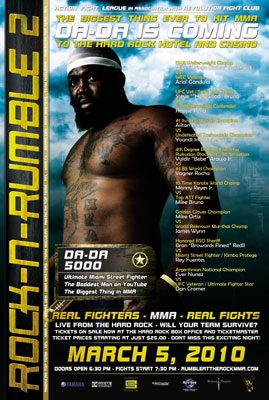 Dada 5000 is hoping to follow in the foot steps on Kimbo Slice and become the next street fighter to make it big in MMA. The former member of Kimbo’s entourage will make his MMA debut against Cedric James in Hollywood, Fla on Friday. Naturally, since he claims to be a “YouTube Sensation” there is some footage of him on YouTube.

Commentary
If you search on YouTube there are plenty of videos of Mr. 5000 talking about fighting and lifting weights, but there are very few of him actually fighting. In this farce he knocks his opponent down twice without landing a solid punch and finishes the fight. How will he look in his MMA fight? Honestly, who cares? His opponent is 0-4, so he might win. Kimbo had a much more exciting highlight reel before coming into MMA, and we have seen how he has panned out. Let’s hope that this guy doesn’t capture the imagination of of anyone. If he does, he could be headlining a card on Showtime in no time.