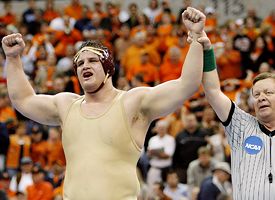 Konrad made the revelation during a backstage interview earlier tonight following a first round TKO (doctor’s stoppage) of Joel Wyatt during a Matrix Fights event in Philadelphia. The win improved Konrad’s professional record to 2-0.

Konrad broke the news during a post-fight interview after he was asked about his plans for the future. He said that he had been pursued by a variety of other promotions, but made the choice to sign with Bellator.

“I’m excited to sign with Bellator,” Konrad said. “It’s a great opportunity to fight for a great company and I’m just really excited for what the future holds with this company.”

In attendance to watch Konrad’s performance was Bellator Fighting Championships founder and CEO Bjorn Rebney, who addressed his promotion’s latest blue chip acquisition with the media following the event.

“Cole Konrad brings some great characteristics to the table that could make him a force at heavyweight,” Rebney said.  “Brock Lesner’s dominance in the UFC has shown the impact that an elite, world-class wrestler can have in the heavyweight division. As a two-time NCAA heavyweight champion who is aggressively rounding out his MMA arsenal, Cole’s potential is unlimited. We are happy to be teaming up with him and, as a company, we are excited with what the future may hold.”

Prior to making his professional MMA debut earlier this month in Fargo, N.D., Konrad’s greatest claim to fame in the sport had been his role as a full-time training partner of current UFC heavyweight champion Brock Lesnar. Konrad is a fixture at Lesner’s training camps in Alexandria, Minn. Konrad’s professional debut took place on Jan. 23 with the former aspiring NFL offensive lineman recording his first-ever win just 1:07 into Round 1 following a “polar bear choke” against Gary Hamen.

With his formidable amateur wrestling credentials and close affiliation with Lesnar, Konrad’s recent entry into the professional MMA ranks is a hot topic among fight fans. According to Matrix Fights promoters, ticket sales and media requests surged dramatically following the surprise announcement early this month that Konrad had been added to the co-main event of its first-ever show.

“Cole has already generated quite a buzz,” Rebney said. “We are happy not only to announce our long-term deal with him but to reveal that fans will be able to see his next fight on one of our nationally televised May events on FOX Sports Net, NBC and Telemundo.”

Bellator’s second season will continue for 11 consecutive weeks following the April 8 kickoff in Florida with a third season already planned and slated to start in August. After making a strong debut in its first season last year on ESPN Deportes, Rebney announced a landmark television deal this past fall that included new partnerships with FOX Sports Net, NBC, and Telemundo.

Much like Season 1, Bellator will be conducting tournaments at 145, 155, 170, and 185 lbs. during Season 2 with the winners earning title shots against the promotion’s respective champions in each weight class.

Bellator Fighting Championships is a Mixed Martial Arts promotional company with offices in Los Angeles and Chicago.  Bellator’s founder/CEO, Bjorn Rebney, is an experienced fighting sports and entertainment professional with a deep commitment to the purity and integrity of the sport of MMA and its athletes.  Bellator Fighting Championships’ executive team is comprised of top industry professionals in the areas of live event production, television production, fighter relations, venue procurement, sponsorship creation/development, international licensing, marketing, advertising, publicity and commission relations.