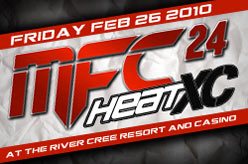 Yves Edwards marked himself as the top contender for the MFC lightweight belt yet it was a pair of spectacular knockouts that stole the show at the Maximum Fighting Championship’s MFC 24: Heat XC on Friday night at the River Cree Resort and Casino, just outside Edmonton, Alberta.

A flurry of punches from Edwards (37-15-1) dropped opponent Derrick “The Eraser” Noble into his corner and Edwards continued to rain down an array of strikes until referee Vern Gorman stepped into to stop the proceedings at 4:44 of Round 1 in the night’s main event. “The Texas Gunslinger,” who was making his debut in the MFC, looked crisp right from the start although Noble (25-13-1) did catch him with a sharp hook in the early moments.

Edwards had a star-studded corner backing him up including MFC welterweight contender Luigi Fioravanti, and in an interesting twist, reigning MFC lightweight champion Antonio McKee.

While Edwards’ win was convincing, it was overshadowed by the dramatic finishes laid out in front of a sold-out crowd by two other fighters. In the card’s co-main event, English invader Tom “Kong” Watson sent a resounding message out to the rest of the MFC’s middleweight contingent when he scored a vicious head-kick knockout over home-town fighter Travis Galbraith.

Watson (11-3) caught a wide-open Galbraith perfectly on the side of the head and sent him crashing face first to the mat. Galbraith (17-7) was motionless for several seconds and then needed help getting to his corner after what was one of the most devastating knockouts in the history of the Maximum Fighting Championship. It was a clear winner in the Knockout of the Night derby, though early on it looked like that honor would go to Jesse Juarez.

Juarez (13-5) didn’t even break a sweat as he came across the ring, waited for Nathan Gunn to drop his left hand and then fired out a spectacular head kick that put Gunn down chin first into the canvas. Juarez followed up with one hammerfist but the result was in the bag from the moment Gunn (7-2) went down and the verdict was in a mere 11 seconds into Round 1. It was the seventh consecutive victory for Juarez, who called out for a shot at the MFC welterweight title after the bout. For Gunn, it was a second straight horrific knockout after he fell in equally scary fashion to Pete Spratt at MFC 22.

The other key result on the first collaboration show of MFC and Heat XC went to Dwayne Lewis, who also scored his seventh straight win as he stopped Ryan McClain at 2:08 of Round 2. Lewis (11-4) went on the attack right from the start and stalked McClain throughout the opening round. McClain had sporadic success with counter strikes, but Lewis was all business in the second stanza, dropping McClain (9-4) and finishing it off with a ground-and-pound assault.

Lewis, backed by an incredible throng of supporters from his home town, was critical of his own performance but inched a little closer to a coveted crack at the MFC light heavyweight belt.

The Maximum Fighting Championship returns on Friday, May 7 with MFC 25: Vindication at its new home – Northlands Expo Centre in Edmonton, Alberta. Already confirmed for the fight card are matchups pitting Luigi Fioravanti against Pete Spratt, and Ryan Jimmo taking on Wilson Gouveia. Tickets for MFC 25 go on sale Monday, March 1 and they are available through the MFC Ticket Hotline at (780) 504-2024 or via Ticketmaster at www.ticketmaster.ca and charge-by-phone (780) 451-8000.