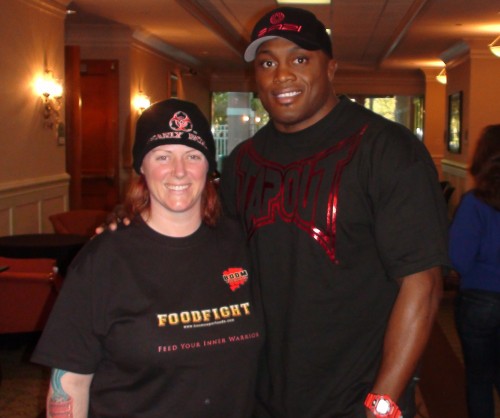 Superstar Nick Diaz gave me a candid interview about his role in MMA today. In his “real talk” manner he explained that he is one of the best in the world because of his well-rounded expertise in mixed martial arts. He feels he is the whole package unlike a lot of MMA fighters who are really good at stand up with either kickboxing or with their hands or really good on the ground with wrestling or jui jitsu.

Nick feels that a Welterweight championship fight is the best fight he can give to his fans right now. “I’m very happy to fight at 170. I look the best at that weight,” said Diaz. “I like it, I feel the best at that weight. I’ve been waiting for a long time to fight in here at this weight class. Those last two fights were not my idea. I’ve fought at welterweight most of my life, so this isn’t a new thing to me. I’m happy to fight at welterweight.”

Nick’s opponent in this fight card is, DREAM Welterweight Champion, Marius “The Whitemare” Zaromskis. The 29-year-old fighter from Siauliai, Lithuania, has won his last three fights on first-round knockouts via head kick. When asked about what his predictions were for this fight, Zaromskis explained, “I think Nick is a very well rounded fighter. He has strengths in both boxing and grappling, just all around. I think it’s going to be a very tough fight for me. As far as how the fight will go or what I’ll be able to do, I don’t want to predict that. We’ll just have to see it in the ring.”

Many compare his style to Mirco Cro Cop with the more upright style of kickboxing and the head kick showing up often as a finisher for him. “I don’t really look for a high kick, because when you look for something you end up being the one who’s getting knocked out,” said Zaromskis. “If I see it there in a split second I’ll take advantage of it. If it’s not there then I’ll use some other weapons. But, I do not look for a high kick.”

The second championship fight of the evening is set to feature Strikeforce 145-pound Women’s Champion Cris Cyborg, and the Netherlands submission expert Marloes Coenen. Cyborg who on Aug. 15, 2009, stopped superstar Gina Carano in the first round to become the first-ever Strikeforce women’s champion is now to many the face of women’s MMA.

“I wasn’t thinking about who is the face of mma when I fought Gina,” said Cyborg. “Gina was just another opponent like anyone else. With me being the face of women’s MMA or not, I’m just going over there and doing my job, making sure I’m training hard and leading up the pack for all women in MMA.” 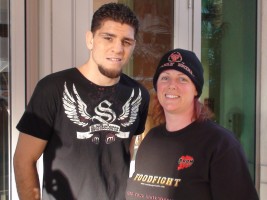 When asked about what will happen in the cage against 28-year-old opponent, Marloes Coenen, a member of Holland’s Team Golden Glory, she replied, “I don’t really think much about what’s going to happen. I just go in prepared for whatever comes. She can bring it, so hopefully she’ll be prepared for war, too.”

Coenen, a mixed martial artist since the age of 14, is most known for her first round win over Roxanne Modafferi on Nov, 7, 2009. Coenen is very much looking forward to this title shot this Saturday. “I won my first title in the 90’s in Tokyo, and ever since then I haven’t got a nice title shot,” stated Coenen. “I’m very eager to get this title. I hope it’s a good start to my career in America.”

Being a fighter myself, I was interested to hear both ladies’ thoughts on the future of women’s MMA. “It’s very important that women start fighting,” said Coenen.”  When I grew up, it wasn’t an option for a girl to fight. There was some judo, but not too much around here. I think it really helps women. If you start fighting, you feel stronger in your mind and physically you’re stronger than you thought you were. That will help you in daily life. I just think it’s very important that we have some messengers like Gina, like Cris, and hopefully, myself, that will inspire women to do it, to think that ‘if they can do it, I can do it,’ and start working out.”

Cyborg also spoke about the future for women in the sport. “Every woman that’s working with MMA right now, and every woman that’s fighting plays a very important role in the sport and where the sport is going to take them,” she said. “I really hope that I have a lot of fans out there and I hope to train little Cyborgs all over the world. I’m just excited to be part of it.”

Herschel Walker seemed very confident taking interviews about his fight with Greg Nagy. The difference between Herschel and other cross-overs from football to MMA is his body weight conditioning and personal history in martial arts. The explosive way he has conditioned his body has given him an advantage in the sport of MMA.

He attributes his quick learning of the sport to his past martial arts training. The 220 pound former running back, holds a fifth degree black belt in Tae Kwon Do and has additional training in the combat disciplines of Muay Thai and Kenpo. He has been training at San Jose, California’s American Kickboxing Academy (AKA), under co-owner and head trainer Bob Cook.

“I’ve been training for several years. I would play college football games on Saturday and then compete in martial arts tournaments on Sunday after church. I’m now looking forward to opening up another chapter in my life and to competing in MMA,” said Walker. 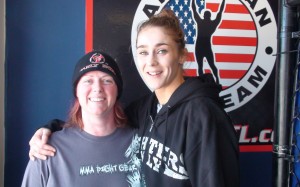 Undefeated heavyweight Bobby Lashley will face Wes “A Whole Show” Sims on the card. Many feel Bobby has a real chance to eventually become a reigning heavyweight in MMA. Since his cross over from wrestling Bobby has proved to be a force to be reckoned with in MMA. The 6 foot 3 inch, 250-pound Lashley, also a former collegiate wrestling star, and member of The United States Army, is looking forward to showing MMA fans that he is one to follow in the sport.

“I’m looking forward to fighting for Strikeforce and challenging myself by taking on some of the top heavyweights in MMA,” said Lashley. Lashley is opening an American Top Team in Colorado and plans to eventually fighters in the sport after he is done with his fight career.

Stay close as Pro MMA Now (www.prommanow.com) brings you more exclusive coverage on this exciting fight card live from Miami throughout the weekend.