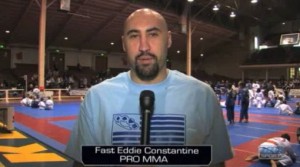 Edward Constantine, 31, known to mixed martial arts fans as “Fast” Eddie of ProMMA.info’s podcast “The Info,” was found dead by four friends in his Los Gatos, Calif., residence in the early afternoon of Jan. 25, 2010, after committing suicide.

The passionate and dedicated member of the mixed martial arts community is also known for “MMA’s Biggest Loser” — a weight loss competition against MMAjunkie.com’s John Morgan.

A purple belt under Renzo Gracie, Constantine was UFC and WEC veteran Tim McKenzie’s first jiu-jitsu trainer while the two were at University of the Pacific together. He was currently training under Dave Camarillo at the Guerilla Jiu-Jitsu founder’s Pleasanton, Calif., academy. Constantine taught friends and offered women’s self-defense classes free of charge in his spare time.

Funeral services are currently being planned. A memorial fund, “Fast Eddie’s Fighters,” has been established to preserve Constantine’s memory by sponsoring young jiu-jitsu fighter’s training under Camarillo and more to come.

Donations for the services and the fund can be made to:

Or made via Paypal to: fasteddiesfighters@gmail.com

Read this special article by Danny Acosta of FIGHT! Magazine to learn about “Fast” Eddie’s Fighters.

Here is another great tribute to Eddie from Chris Leo at Projekt Label.

4 thoughts on ““Fast” Eddie Constantine of ProMMA.info dead at 31”