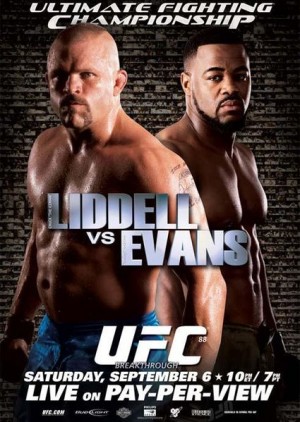 Ryo Chonan vs. Roan Carneiro
Rd.1 – Not a lot of action. Ryo got cut over his left eye.
Rd.2 – Carneiro slips and Chonan gets on top landing some elbows and ground n’ pound. Carneiro spent most of the round on his back.
Rd.3 – Chonan stayed on top most of this round as well even though Carneiro got a good takedwon.
Ryo Chonan defeats Roan Carneiro by decision

Tim Boetsch vs. Michael Patt
Rd.1 – Boetsch looked to be back on his game with impressive striking. He knocks Patt against the cage and Patt drops to the ground as the ref jump in.
Tim Boetsch wins by TKO (strikes)

Kurt Pellegrino vs. Thiago Tavares
Rd.1 – Pellegrino beat Tavares badly this round. Very surprised at the heart of Tavares. At the end of the round his eye is almost swollen shut and he is cut up bad. Pellegrino landed a barrage of punches and elbows standing and on the ground.
Rd.2 – Tavares comes back. He takes Pellegrino dow and stays on top of him for most of this round landing some ground and pound. There was a point in the round when Pellegrino got Tavares in a submission and it appeared to everyone that Tavares tapped but the ref didn’t see it.
Rd.3 – Tavares comes out fast and looks light on his feet. Tavares throws a high kick that misses. Pellegrino is able to control the round though.
Kurt Pellegrino wins by unanimous decision

Matt Brown vs. Dong Hyun Kim
Rd.1 – Kim gets a takedown but Brown stands up, Kim jumps on his back and Brown can’t shake him. Kim has a standing rear naked choke but Brown escapes, however Kim takes his back again while standing. Left punch by Kim. Body shot by Brown. Knee by Brown. Knee by Brown. Kim takes Brown’s back again as Brown stands halfway up. Great round.
Rd.2 – Brown is pouring on the pressure this round. Kim on his back as Brown strikes from the standing position. Brown getting the better part of the clinch game now. Brown ducks a punch by Kim and retalliates with a body punch and head strikes. Brown on top of Kim now on the ground with elbows and punches. Brown wins that round big.
Rd.3 – Leg kicks by Brown. Kim gets the takedown and gets side control. Brown gets up. Kness from the clinch by Brown. Left elbow by Kim. Kim in Brown’s full guard. Big elbow by Kim from the mount cuts Brown badly. Wow. Kim comes back with a very impressive third round performance.
Dong Hyun Kim wins by split decision

Nate Marquardt vs. Martin Kampmann
Rd.1 – Marquardt lands a head kick that stuns Kampann badly. Marquardt swarms on him with relentless punches to the head and body that finally drops Kampann down with his back against the cage and the referee steps.
Nate Marquardt wins by TKO (strikes)

Dan Henderson vs. Rousimar Palhares
Rd.1 – Henderson lands a big right. Henderson with another big right, then sprawls a takedown attempt from Palhares. Palhares with a wheel kick that misses but great technique. Henderson drops him with a big uppercut. Palhares lands a left then a sidekick to the body of Henderson. Palhares has side control. Palhares goes for a kneebar as bell sounds.
Rd.2 – Big powerslam by Palhares. Elbows and punches by Palhares. Palhares almost has a heel hook but Henderson punches him and escapes. Big right by Hendo. Right hand by Hendo followed by a knee.
Rd.3 – Knee by Palhares. Hook kick by Palhares. Sprawl by Hendo and again. Left jab by hendo followed by a right. Leg kick Palhares. Left by Hendo. Right hand by Hendo puts Palhares down, Palhares grabs a leg but Hendo escapes. Big right by Hendo puts palhares down again and Hendo follows up with a big right hand from the standing position as Palhares is on his back. Nice round for Dan.
Dan Henderson wins by unanimous decision

Chuck Liddell vs. Rashad Evans
Rd.1 – Liddell with a jab. Evans looks very light on his feat and in great shape. Evans throws a measuring jab. Liddell pursuing and hits Evans with a right that bounces Evans off the cage. Evans is elusive and lands a grazing shot that cuts Liddell. Liddell throws a head kick at the bell as Evans ducks. You can feel something big is about to happen.
Rd.2 – They trade shots and Evans lands a left hook and another one. Liddell lands with a straight right. Liddell throws and uppercut at the same time Evans throws a lightning quick overhand right that hits Liddell right on the chin, his neck snaps, and falls face first to the mat with his hands at his sides. Herb Dean, the referee rolls LIddell over on his back however he is still out over a minute later. Rashad Evans has just knocked out the Iceman in this historic event at 1:51 of the second round. Liddell finally gets up and is able to leave the cage on his own two feet with the support of his trainer. Everyone is relieved the Iceman is ok. That was one of the most brutal knockouts in the history of the UFC.